As the modern internet grows ever more important to daily life, the necessity of securing privacy and security for its users grows steadily more urgent. One of the key pieces of this puzzle is the password manager: applications that help you keep track of the many passwords you’ll need across online accounts, generate secure passwords, identify vulnerabilities and protect your online identity. One of the many contenders in this market is SaferPass, with a reputation for excellent security, convenience and innovation. Here, we’ll be looking at how well SaferPass delivers on the five key features of a password manager.

PasswordManager.com earns a commission from referring visitors to some products and services using affiliate partnerships.

Overall, SaferPass features a robust feature set that’s particularly strong on remote management functions and password generation but that could be stronger on reporting and data organization. We’ll delve into the details below.

The password management market is crowded with companies making plenty of promises, so our method is to focus on a few core features to make informed comparisons easier:

Let’s have a look at how SaferPass measures up in each of these categories.

SaferPass stores password data locally on your machine, protected with a master password, several forms of device-based two-factor authentication and modern cryptographic technology including AES 256-bit encryption and salted password hashing. The company employs a zero-knowledge protocol, which means only the user ever knows and has access to their master password. Some of the two-factor authentications it employs are reasonably commonplace, such as the use of the Google Authenticator or Authy to create a companion six-digit device code to the user’s master password. More unusual is SoundLogin, which generates a sound-based verification tone.

Additional security features include a Security Report that identifies and alerts users to weak passwords, a powerful password generator that uses all four character types to generate 16-character passwords at the default setting, and the Secure Me function that identifies any devices and browsers connected to the user’s SaferPass account, providing logout, browser history deletion and tab closure options. There are other password managers that provide more powerful, customizable and in-depth versions of reporting, remote management, password generation and two-factor authentication features, but what SaferPass provides for these core features is solid.

It should be noted that SaferPass’ privacy policy does allow the company to collect a minimal amount of user data for statistical and customer contact purposes. However, since this data can’t be used to compromise the security system of your password vault, it represents a minimal security risk, if any.

SaferPass works on Windows and Mac systems, as well as Android and iOS mobile devices and with most popular browsers. It lacks Internet Explorer support, which was more of a problem when Explorer was still active in at least some roles for running office servers (for example) but is less of a disadvantage as Windows’ end-of-support date for Explorer rapidly approaches. It generally works and syncs smoothly and reliably across its supported platforms and devices.

Usability & Ease of Use 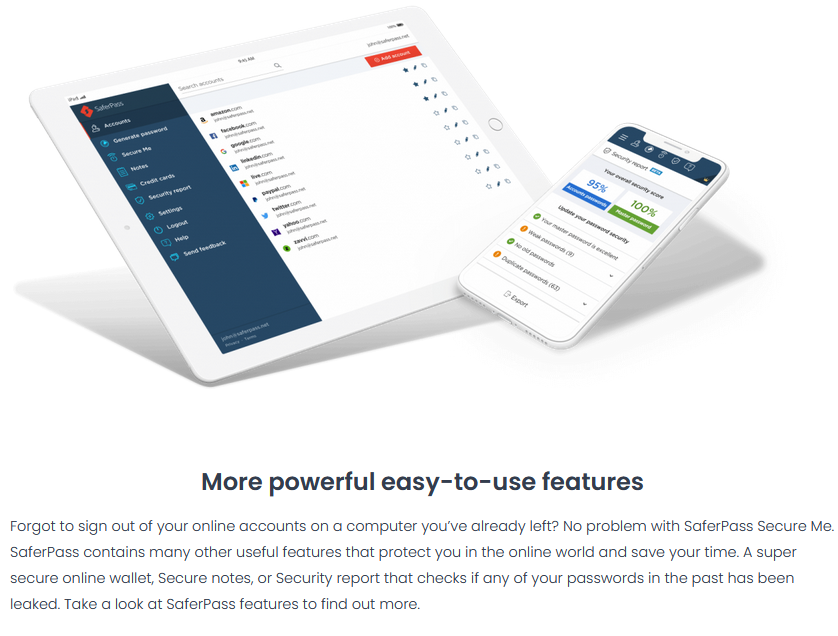 SaferPass is simple to install, set up and use no matter what kind of device you’re using to access your account, and it also has a convenient offline mode when necessary. The user interface shows great consistency across operating systems and browsers, making it easy to switch from one device to another and generate passwords and reports. Password generation is a single-click process, and SaferPass offers “intelligent autofill” for digital forms, using proprietary algorithms to detect and prefill your credentials on any site you visit. However, it also makes it simple to deactivate autofill if you’d prefer not to use it.

SaferPass allows users to record secure notes, using them to track secret software keys, Wi-Fi passwords, router settings or other information they might need. These notes can be sorted by color-coded categories, are secured and access-restricted by the same measures as other password data and sync across your devices in the same way as the rest of your secure vault. SaferPass can import data from several popular password managers and browsers, but its tools for importing, customizing records and organizing passwords by type and category are relatively rudimentary compared to some other leading choices on the market. It does now provide an account recovery key, meaning that losing your master password does not necessarily mean having to delete your entire account and start over.

Despite its limitations, the software gets good marks for both efficacy and ease of use — easy enough, in fact, that it’s simple to explain how to use it to someone who isn’t particularly computer-literate. This is definitely a point in its favor. 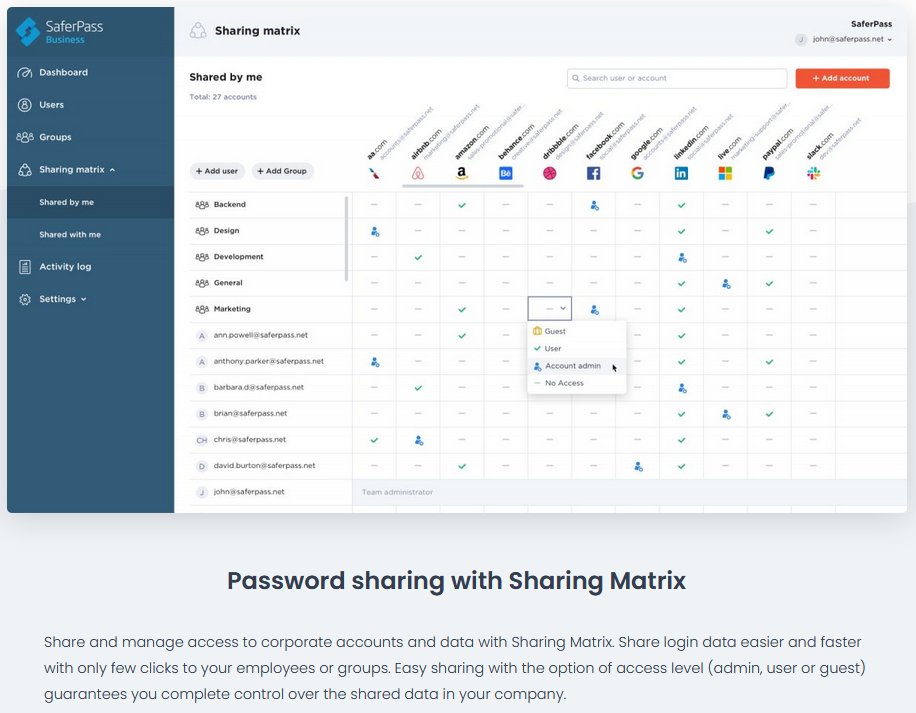 SaferPass is in the process of implementing secure password sharing, but it doesn’t presently have this feature. The closest it comes is making it easy to export your vault to Excel with a few clicks and import that information into another SaferPass account. For the near future, as SaferPass debuts and debugs its preferred approach to secure password sharing, users will need to go with another password management solution if having a stable and fully developed version of this feature is important.

SaferPass offers a free version with a basic feature set and a seven-account limit. This would be useful for test-driving the most fundamental features and the user interface, but let’s face it: It’s a very rare modern user who doesn’t need passwords for more than seven accounts, so in the longer term, this is relatively useless. Fortunately, the full-featured premium version offers unlimited accounts and is reasonably affordable at either $1.99 a month or $19.99 a year. It’s a fair price to pay for the reliable, if unspectacular, feature set and functionality that SaferPass provides, and as its feature set is gradually expanding, you’ll be gaining access to service that is on its way to becoming a serious contender in the password management space.

SaferPass is fairly simple to implement, and many of its features are similar to (though typically somewhat less sophisticated than) the strategies employed by better-known solutions like LastPass.

What Customers Are Saying

Customers are generally positive about SaferPass’ reliability and ease of use: “I found out I had more than 70 online accounts and increasingly found myself using this extension and the mobile app across all the family of devices we have. It is essential. I’ve looked into the security side and these guys are [pretty much] the most secure. The product beats [the] competition [for ease] of use.”

SaferPass isn’t the most elaborate password manager on the market, but it delivers ably on the core mission of securing and encrypting your password and making it easy to access your passwords on all your devices. Its ease of use and powerful password generator combine with the helpful remote logout and browser history management of the Secure Me feature to deliver an attractive password management package at an affordable price. As its feature list grows, look for SaferPass to continue as an up-and-coming presence in password management.